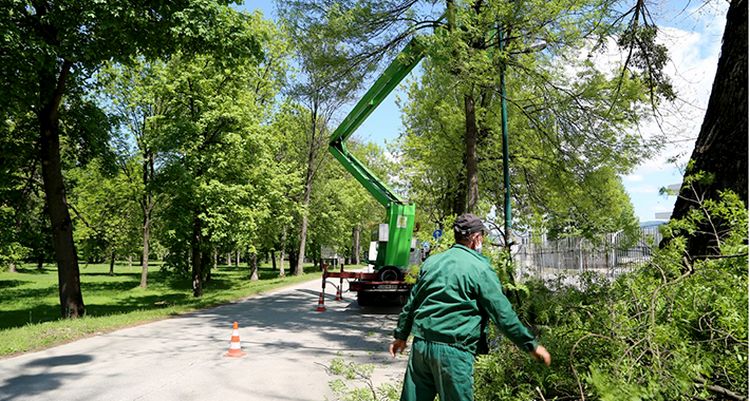 The KS Prosecutor's Office has opened an investigation against Safet Baltic for his fake diploma. He was the director of KJKP "Park" until 2016, when he made a tax debt of 2.6 million KM

The Sarajevo Canton Prosecutor's Office has opened an investigation against Safet Baltić, former director of the Kantonalnog javnog komunalnog preduzeća (Translation: Cantonal Public Utility Company) (KJKP) “Park”, on reasonable suspicion that he committed the criminal offense of “forgery of a document” under Article 373 paragraph 2 of the Criminal Code of the Federation of BiH, it is confirmed from this Prosecutor's Office for Fokus.ba.

The spokesman for the Sarajevo Canton Prosecutor's Office, Alem Hamzić, pointed out that when the prosecutor's decision, in this case, is made, the public will be informed about it in a timely manner.

According to the information we received from the Ureda za borbu protiv korupcije i upravljanje kvalitetom KS (translation: Office for the Fight against Corruption and Quality Management of KS), which submitted a report on the criminal offence, he is charged with using the diploma of the Faculty of Economics of the University of Sarajevo – the profession of an economist, allegedly issued on January 20, 1988, which was determined by subsequent checks that it is not credible.

Baltić was appointed director of “Park”, then as a staff of BPS, on May 13, 2013. The Supervisory Board of this company removed him from the position of director in June 2016, after the Assembly of the company and the Assembly of Sarajevo Canton had not previously adopted the financial report of “Park” for 2015. At that time, Alen Ramić (SBB) was appointed Baltić's successor.

Seven months later, the Municipal Court in Sarajevo, more precisely in March 2017, issued a decision declaring Baltić's dismissal illegal and places it out of function. In the decision, the court orders “Park” to return Baltić to work and enable him to perform the duties of the director, until the expiration of his mandate in May. That, however, was not respected.

But this is not all that Baltić could be charged with. Namely, while he was the director of the Park, so for a period of three years, this cantonal institution made a debt for contributions for mandatory pension and disability insurance in the amount of as much as 2.6 million KM. More precisely, it is about the amount of 2,672,796 KM. 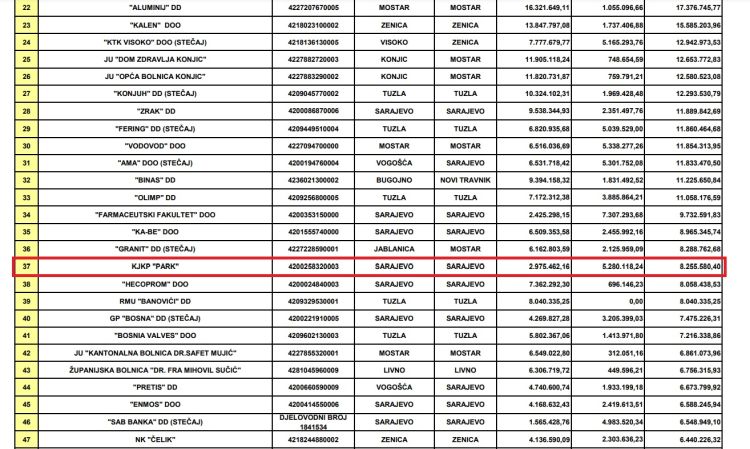 While Balić was the director of the Park, this cantonal institution incurred a debt for contributions in the amount of as much as 2.6 million KM

This is the data that, based on the Law on Freedom of Access to Information, was submitted to Fokus from KJKP “Park”. As we were told, during Baltić's time, additional debts were created in the form of unemployment contributions, in the amount of 83,309 KM.

By the way, KJKP “Park”, according to the latest updated ranking of tax debtors published by the FBiH Tax Administration as of March 31 this year, is in 37th place with total tax arrears of 8.2 million KM. 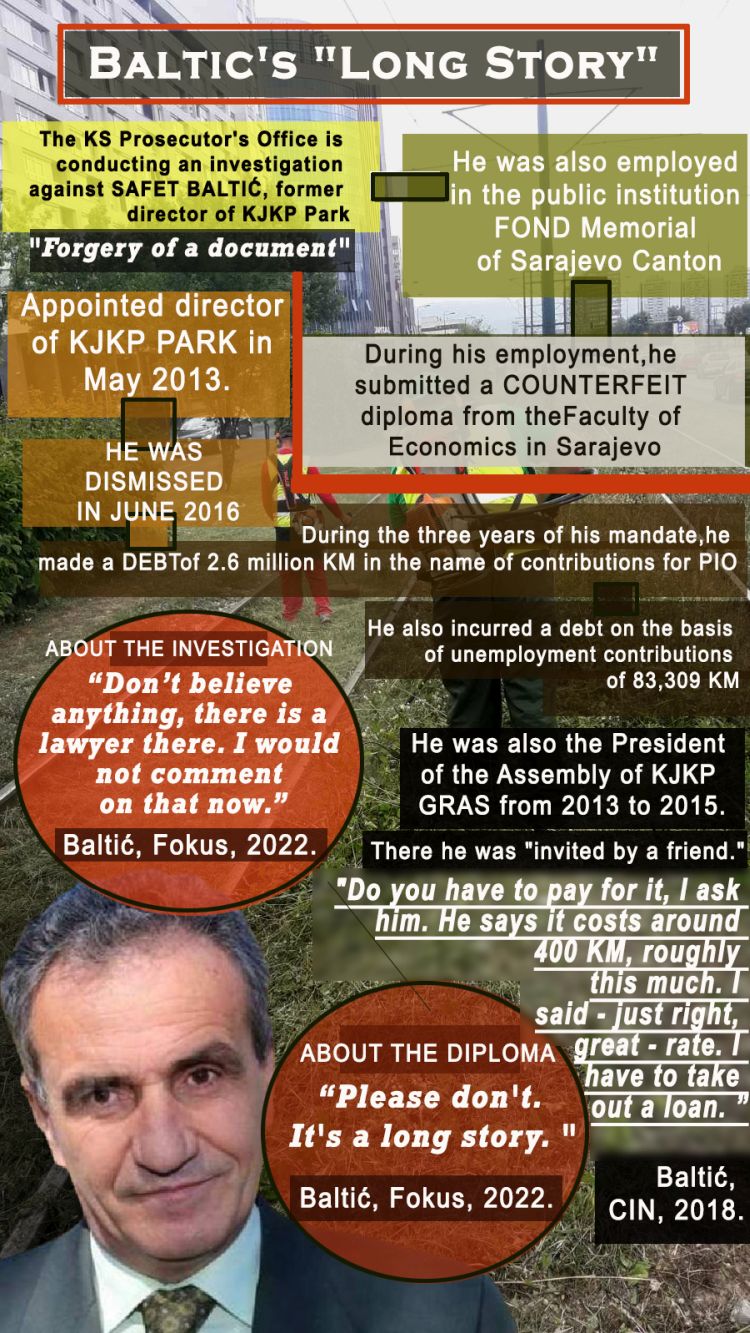 In November 2019, the Ministry of Communal Economy and Infrastructure of KS, then headed by Srđan Mandić (NS), established that the debt of “Park” on several bases amounts to up to 13 million KM.

At that time, the Ministry asked the Assembly, the Supervisory Board and the management to conduct a detailed investigation, that is, to perform an in-depth analysis of the business and inform it about the persons who brought the company to the situation it is in today. Fokus.ba officially addressed the Ministry of Communal Economy and Infrastructure, headed today by Enver Hadžiahmetović (NiP), in order to obtain information on the findings of the in-depth business analysis, but we did not receive an answer.

Also, the KJKP “Park”, headed today by the director Adis Bešlić, told us that they have no information about the said analysis. Thus, the question justifiably arises as to whether it was done at all, since no one has been responsible for creating doubts about the Public Company “Park” until today, including Baltić.

The current management of KJKP “Park” presented to Fokus the information according to which Ramić, as Baltić's successor, repaid part of the debts, and during his term, there were no new ones based on contributions for PIO and unemployment insurance. For the remaining part of the debt, as they stated, an Agreement on Deferred Payment was concluded with the FBiH Tax Administration.

On that basis, as it was confirmed to us, the property of “Park” was mortgaged, which additionally speaks to what situation this public utility company is in. Fokus.ba had an insight into the land registry excerpts in which it is evident that the administrative building of the “Park”, in addition to a number of other real estate and plots belonging to this company, is mortgaged until the debts are settled.

Fokus.ba contacted Baltić to hear about his position. When asked about the fact that the KS Prosecutor's Office opened an investigation against him for a forged diploma, Baltić said:

– Don't believe anything, there's a lawyer there. I would not comment on that now, please.

After we asked him if he was the director of “Park” with this diploma, his answer was short: “Don't, please. It's a long story. ”

Baltić was one of the interviewed officials at the time, and he told CIN that he came to the GRAS Assembly with the help of a friend from his party.

– Do you have to pay for it, I ask him. He says it costs around 400 KM, something like that. I said – just right, great – rate. I have to take out a loan – he said. After that, he entered the assembly of the company and became a member of the BPS.

Safet Baltić was also one of the witnesses in the “Amir Zukić and Others” case, which concerns abuses in employment in public companies. He was mentioned in that case as a person in the employment chain for money.

Namely, according to a BIRN report from the trial, witness Spaho Muhović, who was granted immunity from prosecution by the Prosecution, said that he gave the accused Safet Bibič 11,000 KM to employ his son in “Park”. At that time, Safet Baltić was the head of “Park”.

At that hearing, the defence presented him with a part of the testimony from the investigation in which he stated that he asked Safet Baltić for help for his son's job, which Muhović confirmed, but clarified that he had never seen the man.
Baltić then said that in 2014, the company employed seasonal workers through the Employment Bureau of the Sarajevo Canton and that Armin Muhović, as far as the witness recalls, was deployed in Novi Grad.

– Senad Trako (one of the accused op.a.), whom I know, asked me if Muhović could get a contract for an indefinite period. I told him that there was a ban from the Canton Government – said Baltić and added that apart from this case, there were stories that “someone gave money for someone”.

When it comes to KJKP “Park”, it should be emphasized that the Prosecutor's Office of Sarajevo Canton formed case number: T09 KTAK 15761 20 due to the existence of indications of illegal employment of five people in that public company, about which Fokus wrote in September 2020.

Due to the obvious existence of indications and suspicion that the acting director of KJKP “Park” (Edin Abdurahmanović) contrary to the procedures enabled and approved the employment of five people in the company, which illegally enabled them to acquire all employment rights, the Office then informed the Cantonal Prosecutor's Office. Based on the submitted information, the KS Prosecutor's Office formed a case.

Subota, 30 Juli 2022 11:03
Impuls istražuje
Public procurement of the Bijeljina hospital: When the tender is "well-tuned" - the winner is known in advance

Ponedjeljak, 18 Juli 2022 10:54
Impuls istražuje
Ilidža: From the fight against construction chaos to the legalization of crime by the previous government

Gacko: They leaned a beach bar against a cultural and historical monument, and “borrow” electricity from RiTE