The facility for the accommodation of gendarmerie units and SAJ, which will be built by the company "Univerzal BS", in the Training Center of the RS Ministry of Internal Affairs in Zalužani, will cost almost 950 thousand KM, without VAT. The offer of this company, after the public procurement procedure, was accepted as the most favourable, although previously the value of the works was estimated at 850 thousand KM.

So, although the e-auction system was used, the goal of which is to lower the price of public procurement, this was not the case here, so this job will be obviously overpaid for over 100 thousand KM of public funds. However, this is not the only problem with the public procurement of the RS Ministry of Internal Affairs, especially in the case of the construction of the Training Center in Zalužani.

When the Training Center of the Ministry of Internal Affairs of Republika Srpska was ceremoniously opened in 2018 in the former barracks of Zalužani, it was announced that about 6.5 million KM would be spent for its extension and reconstruction. A year earlier, the National Assembly of the Republika Srpska passed a decision on long-term credit indebtedness, for exactly that amount.

Three and a half years later, the facts show that over 15 million KM have been spent so far and because of the frequent conclusion of contracts for new procurements of works this figure is growing almost dizzyingly.

Space for manipulation of public funds

The problem is, apart from the recorded waste of public money beyond all announcements and expectations, and the obvious favouritism of certain performers. This is especially evident in a large number of direct agreements and negotiation procedures. These are the methods that leave the most room for various manipulations and setting up favoured contractors.

The meeting of the most favourable bidder for the construction of a facility for the accommodation of SAJ units and the gendarmerie is the last in a series of major public procurements of works in this complex.

Minister Lukac signed the decision on awarding the contract to the company "Universal BS" on January 27 this year. 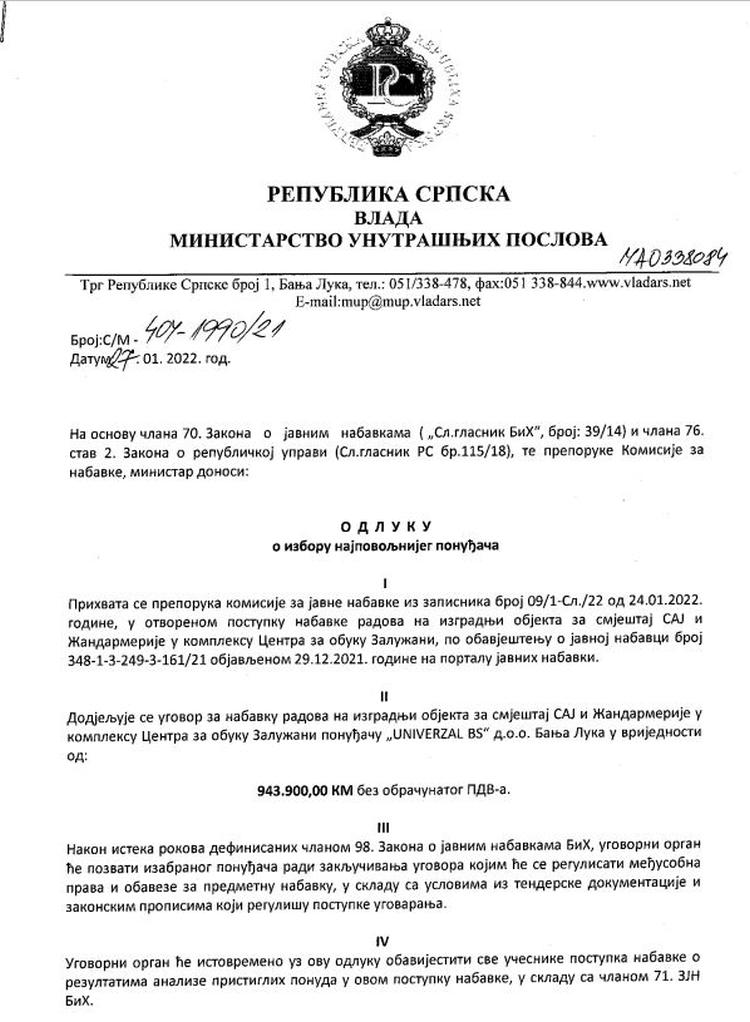 The business cooperation between the ministry and this company starts much earlier. Univerzal's offer was chosen as the most acceptable for the works on the reconstruction and adaptation of the hangar for the accommodation of police horses, also in Zalužani. The contract worth 346,760.10 KM was signed on March 25, 2019.

It will turn out this time as well, that the assessment of the value of the works was not good. Thus, on the basis of the negotiation procedure, "Univerzal" will get a job worth 10,640 KM for additional works on the same facility. The contract on this additional work was signed on January 23, 2020.

However, even that was not enough for the final completion of the facility for housing horses, so "Univerzal BS" was already assigned the job of building an annexe along with this facility at the beginning of December of the same year. The job, worth over twenty-three thousand KM, was awarded through a competitive request.

The award of public procurement contracts on the basis of negotiated procedures and competitive requirements has the most room for manipulation and irrational spending of public funds. This is what experts in this field say.

At Transparency International BiH, they are determined that the fact that the law allows for such procedures for "lower value" procurement does not mean that they are always justified. The emphasis is on the fact that both the negotiation procedure and the competitive request are allowed, but nowhere in the law does it say that they are obligatory. Another manipulative space in these procedures is the frequent "unforeseen works", which significantly increase the total cost of the work.

Damjan Ožegović from TI BiH says that this organization warned in August 2018 that the funds used for the construction of the Zalužani Training Center will greatly exceed the planned amount.

"We have had the case that almost all the basic contracts that have been concluded have been upgraded through negotiation procedures with those contractors, and that is the most controversial of all. It is disputable that they could not estimate the value of the works for any building, even though there were a lot of buildings in the barracks that only needed to be renovated," says Ožegović. 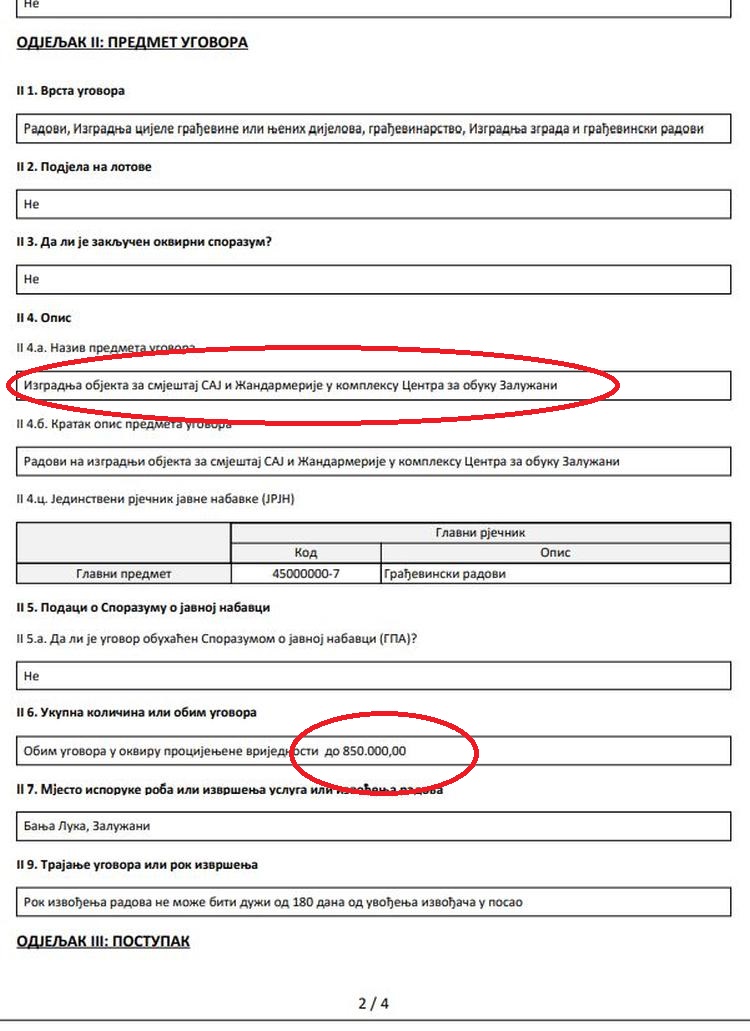 Earlier, the media wrote about the suspicious business of the RS Ministry of Internal Affairs with the company "Unijat-M" from Prijedor, which received the largest part of the "cake" under construction in Zalužani. New and new contracts with this contractor, however, have been signed to date almost on a monthly basis. The owner of this company, Mladen Unijat, is a hunting friend of Minister Dragan Lukač.

"Universal BS" is not far behind in the number of deals with the Ministry of the Interior. And the phenomenon, when these two companies often appear together in tenders, irresistibly reminds of the collision, ie mutual agreement of bidders (often with the contracting authority), which aims to manipulate the final price.

The example from the e-auction raises such doubts.

A job for the hunting society

After the Zalužani Training Center was ceremoniously opened at the beginning of April 2018, public procurement procedures followed.

The highest investment was the construction of a boarding school for the police academy. The job worth 7,904,000 KM was awarded to the Prijedor company "Unijat-M".

The work was awarded through an open procedure at the e-auction, and the estimated value of the works was 9,700,000 KM.

The lowest price was the decisive criterion on the basis of which Mladen Unijat’s company got the job. Given that his offer was about 1.8 million lower than expected, it could be concluded that the Union is building "below every price".

Mladen Unijat’s company will still pay a lot for its "modesty", expressed by the lowest bid prices in this million-dollar deal, through new and new jobs awarded to it by the Ministry of Internal Affairs, all with the signature of his hunting colleague Minister Lukač.

But this is not a "hunting story" - the facts from the public procurement documentation show that already in August of the same year, again thanks to the "lowest bid price", "Unijat-M" got a job worth 1,039,400 KM from the Ministry of Internal Affairs. It is about performing works on the reconstruction and adaptation of building 191, also in the Training Center in Zalužani.

The following month, on September 9, 2020, this company in Zalužani got a "smaller" job of repairing the facade of building number 194, worth 55,500 KM. This time, the most favourable bidder was selected through a "competitive request".

However, it quickly turned out that the Ministry of Internal Affairs would pay for these jobs at a much higher price.

Thus, on June 21, 2021, a contract was signed by which the Prijedor company was awarded a job of 304,311.14 KM “for unforeseen works on the construction of the boarding school”.

The existing law, experts agree, leaves room for additional and unforeseen works in the amount of up to 20% of the total cost of work, but this is where the problem arises.

For example: The favoured bidder applies to the tender with the lowest bid price, which guarantees him safe passage. The loss due to the low price will certainly be compensated on the basis of unforeseen works, but also additional jobs, especially those assigned to direct agreements and negotiation jobs. Precisely in all three cases, the "negotiation procedure" method was used.

The question that the clients of work paid for with public money prefer to keep silent about is why there were certain unforeseen works, and thus a significant increase in the price?

As expected, the Ministry of Internal Affairs claims that everything was done according to the regulations, and if there were omissions, it was "the designers' fault".

"The supervisory team and the project coordinator determined, by the analysis of the project, that the project envisions drainage of rainwater from the roof, but by the designer's mistake the bill of quantities for this segment of works was not submitted and therefore not contracted," the Ministry of Internal Affairs answered.

They also say that "after analyzing the project of waterproofing works, the supervisory team and the project coordinator stated that the project and the contract envisioned lower quality waterproofing materials and that due to the size and importance of the facility it is necessary to install better quality materials."

What they are not saying is whether and who should bear the consequences due to such omissions, which cost the citizens a lot. 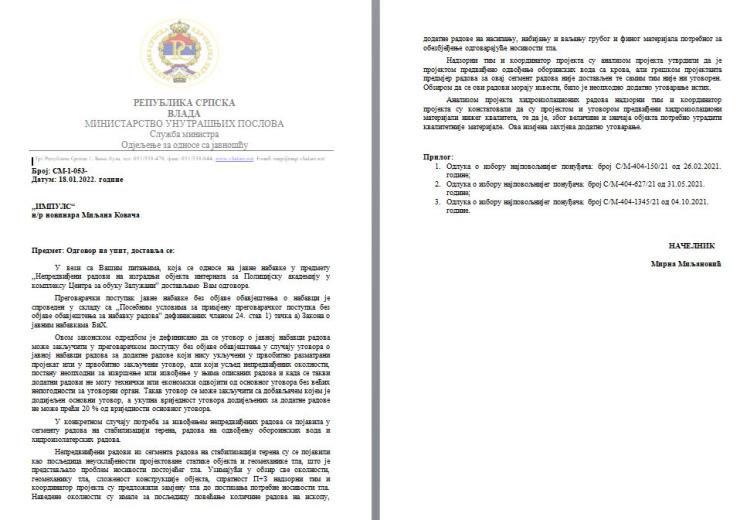 Economist Zoran Pavlović believes that the law, as it is, allows anyone who wants to acquire, that is, to spend public funds, a manoeuvring space in which they can adjust to the desirable favourite they have, which is why it must be urgently improved.

"What is clear is that there is already a practice that the favourites, whether by a party or personal or family line, are the ones who get jobs that are financed from the budget, and that is practically from the pockets of all citizens," says Pavlović, who did not want to comment in detail on the specific procurement of works by the RS Ministry of the Interior, because, as he says, he was not sufficiently informed about them.

However, when the investor received the building permit, he had to define the project, ie all the elements of the project and the cost of construction of the said facility.

So, there is no doubt who should be responsible for, in this case, specific omissions.

We also asked the Ministry of Internal Affairs whether Minister Lukač's personal ties, expressed through joint hunting activities, influenced the selection of this bidder, the owner of this company, Mladen Unijat, in the public procurement procedures conducted by the RS Ministry of the Interior? We are deprived of an answer to that question.

Last year alone, Lukač and Unijat signed 8 public procurement contracts. Most of the work is related to the works in the area of the former barracks, and today the Zalužani Training Center. Uniat's company also built an application form in that complex, worth 27 thousand KM. For 35.5 thousand KM, it repaired "facility 37", performed works on stormwater drainage, levelling the terrain and various other "decently" paid jobs … 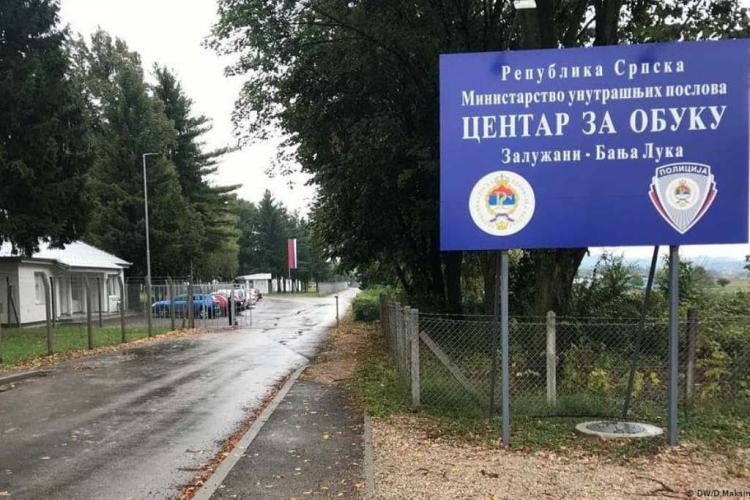 Whether Lukač signed several contracts with Mladen Unijat or with the owner of the company "Univerzal BS", Slavko Banjac, looks like a quiz question. The continuation of the selection of new job offers in Zalužani has been announced, and it is already clear that the dead race between the favoured contractors will continue. With it, unfortunately, is the relentless spending of public funds.

While he was silent in Parliament, MP Jakov Galić raised millions of KM for the family business

Lukač "built" millions of KM more than planned in Zalužane - the RS Ministry of Internal Affairs does not save...

Nevesinje - Tender for transfer from municipal to private pockets

Dunjić does not pay debts, does not lose tenders and dismisses the disobedient