Three marketing agencies, which have a joint founder and the same address, have been receiving lucrative public procurement jobs from institutions and public companies in Republika Srpska for years. In this way, the agencies stifled any competition in the procedures of public procurement of media representation and marketing.

Exclusively all public procurement jobs of the agency owned by the former journalist Dragan Jerinić and his family are obtained by the method of a competitive request or a direct agreement.

The nonsense is that these agencies are, regularly, the only bidders who respond to competitive requirements, because the conditions in the tenders seem to be written just for them. There are numerous examples that indicate this.

In September last year, the General Secretariat of the Government of the RS accepted the offer of the agency "Conectar" doo, to "create and implement a vaccination campaign against Covid 19" for 49,500 KM without VAT.

"Conectar" was the only one to respond to the competitive request for this public procurement, so it had no competition in the selection of the most favorable bidder.

Given that this is a very lucrative business, it is strange that no other agency in the industry was interested in it.

That there are no miracles, however, is clear from the tender documentation, which prescribes such conditions that this bidder could not expect competition.

Thus, the General Secretariat estimated the value of the work at exactly 49,999 marks, which is at the same time the maximum value of public procurement, which can be awarded through the competitive application procedure.

At the same time, as one of the conditions for participation in the procedure of this procurement, the tender documentation stipulates that the bidder must have realized at least one contract "related to the subject of procurement" and whose value is not less than 49,999 KM in the past two years, that is, from the beginning of the business.

The condition is that the bidder "must have a positive business result for the last financial year (that is, for 2020).”

What are the chances for the agency that deals with this activity in BiH to meet all these conditions at the same time and in the year of the coronavirus pandemic?! If not looking at "Conectar" doo, the chances are almost none. 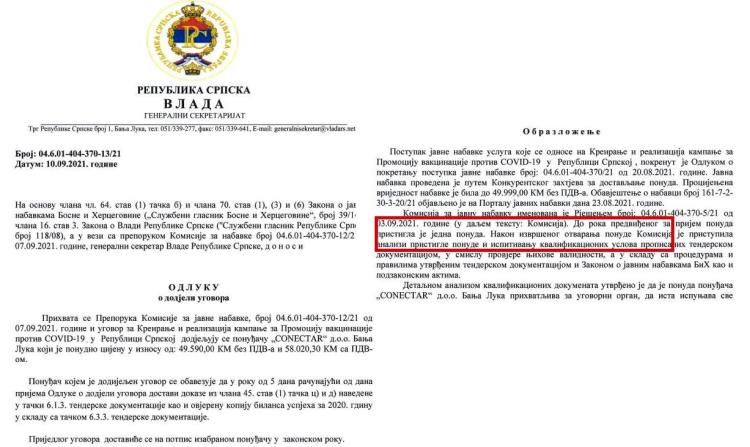 The year for which positive financial business is required (2020) was a time of escalation of the pandemic when there were few who did positive business.

"Conectar" doo was registered on October 13, 2020. This means that even if they tried to operate negatively in the remaining two months of that year, they would hardly succeed.

As is known, 49,999 KM is the maximum cost of a contract that can be awarded at a competitive request. The chances that, in addition to the previous conditions, an agency has a realized contract in exactly that amount, are zero. This has been confirmed to us by several marketing agencies in Banja Luka, which are engaged in the same activity (names known to the editorial office).

"Conectar", apart from this one, did not realize any other public procurement, which does not exclude the possibility that the work whose value is not below the mentioned limit, in the required period, was performed for a private client. Since this is not information of public interest, it is not easy to verify.

There is money, but no likes

That is why it is easy to check what kind of work the "Conectar" agency collected more than 50 thousand KM from the budget of Republika Srpska.

The tender documentation envisages that the campaign will be conducted through the existing page www.koronavirususrpskoj.com, as well as on the Facebook page "Koronavirus in Srpska".

Indeed, daily announcements from the RS Institute of Public Health can be found on the site.

To date, a total of 388 people have followed the Facebook page created within this public procurement.

A video was published on that page, which "earned" 35 likes. If you enter the page, you will be convinced that no one is following or liking the other posts.

Two jobs for one offer

It is surprising that Jerinić decided to run for this lucrative public procurement job, in fact a newly established agency, considering that the marketing agencies "Info5" and "Grape", of which he is also the founder, have many years of experience in the same or similar jobs.

On September 26, 2019, the consortium of these two agencies, also from the General Secretariat of the Government of RS, received the job of presenting economic potentials in Republika Srpska with a total value of 43,183 KM without VAT.

This public procurement was divided into two lots.

However, no one was interested in that either, except for the consortium of Jerinić's agencies, which was the only one to submit an offer. 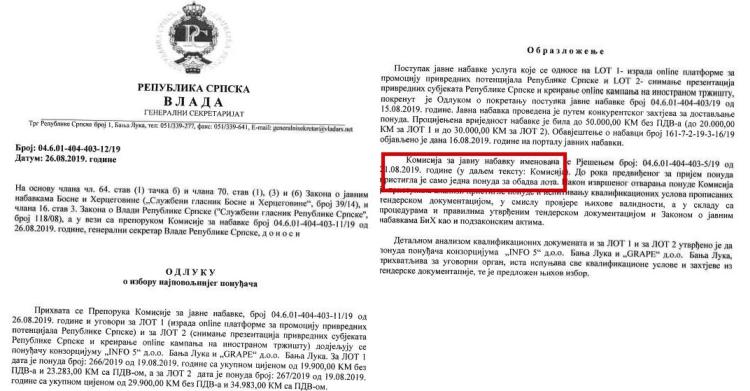 It was not easy to satisfy the very precise conditions prescribed by the tender, for anyone, apart from this bidder.

For example, as a condition in the tender documentation for procurement from lot 2 it is stated that: it is necessary for the bidder to have experience with Google tools and creating an online campaign in a foreign market.

Coincidence or business luck, but it was the employees of the agency “Grape” who, a year earlier, according to the writing of “Nezavisne novine”, received Google training and received certificates, including “Google Analytics”, without which they would not have met the conditions for this General Secretariat tender Government of RS.

When it comes to international experience, the "Grape" agency had a ready answer to that tender condition.

The “Grape” agency's website lists the address and link to the Dublin branch office. The alleged Dublin branch of the Banja Luka agency called "Eloo.Media" has a total of four sentences on its website:

“Eloo! We are – a group of highly skilled professionals with more than 15 years in Affiliate Marketing. Our offices in Dublin and Banja Luka are qualified to help your product or business reach more sales. If you are ready for growth – contact us now.” And that is all the content on the website of the agency which, allegedly, as it says, has been successfully marketing for 15 years.

Apparently, that was a sufficient reference for the offer of Jerinić's consortium to fulfil the tender condition - experience in digital marketing on the foreign market?! 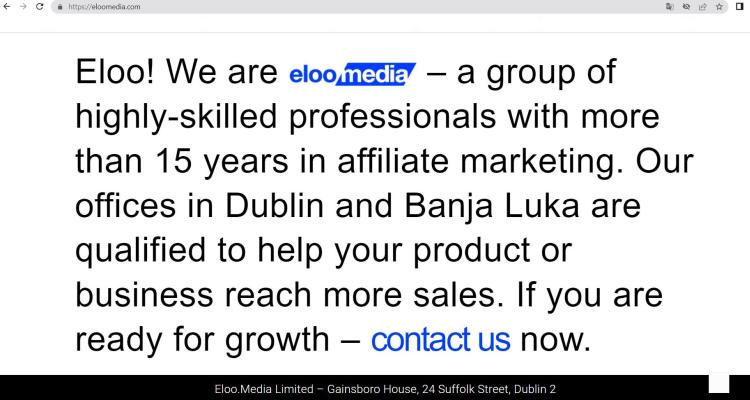 The chief likes to take pictures

Unlike “Grape”, “Info5” prefers to stick to the local marketing market. They also achieved significant business cooperation with local communities.

Thus, since 2018, this agency has from the municipality of Teslić, regularly, annually received a public procurement job "preparation of the municipal bulletin and PR in the daily press".

Last year, they received close to 23,000 KM for that job, and 33,900 KM five years ago. In that range, in the years between, the price of this public procurement, which "Info5" regularly receives, moves.

It is interesting that in this case, too, this agency is the only one to submit a bid from year to year, responding to a competitive request. 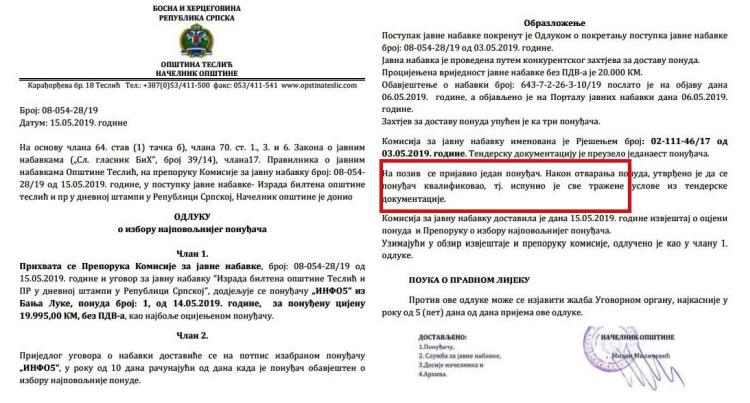 On the official website of the municipality of Teslić, only the decision on awarding the contract to the "Info5" agency for the production of the bulletin, which was signed by the mayor on May 15, 2019, was published. It can be seen from that decision that the selection of the most favourable bidder was made on the basis of a competitive request sent to the addresses of three bidders, and that the tender documentation was taken over by a total of 11 of them.

Regardless, only one agency's offer arrived again.

Although we were promised from the office of Mayor Teslić that they would answer the question, by which they submitted all the competitive requests to the bidders, we did not receive an answer.

From the tender documentation published on the public procurement website, everything is clear, except what exactly the municipality of Teslić pays to the "Info5" agency?! From the imprint of the bulletin called "Teslićke novine", it is evident that the printing house "Nezavisne novine" prints the same.

Employees of the "Info5" agency do not write articles for the municipal bulletin "Teslićke novine". Writing texts, as well as providing adequate photographs, as stated in the tender documentation, is the job of employees in the municipal administration.

The paper has a total of 16 pages, of which only two are in colour. On those 16 pages, in the January issue of this year, you can see as many as twenty-one photographs of the mayor Milan Miličević. Obviously, for the lucrative job he assigns and pays them with the funds of the citizens of Teslić, the mayor received an excellent personal promotion. 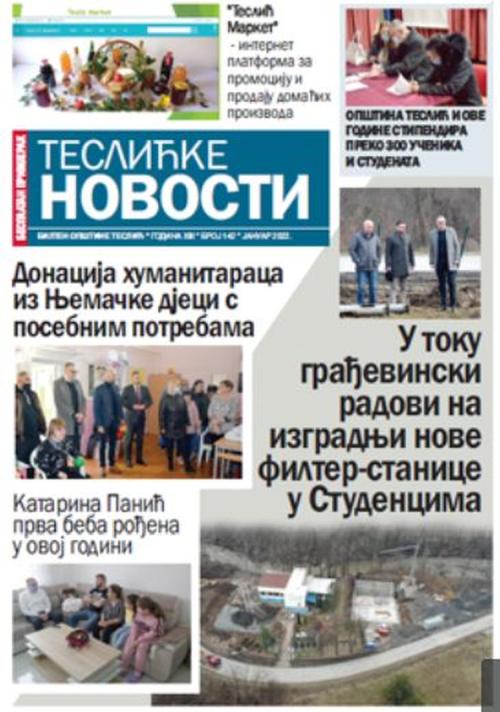 A condition under a condition

On August 17, 2020, the RS Ministry of Finance awarded this agency a public procurement contract for media services worth 34,800 marks without VAT.

The estimated value of the public procurement was 35 thousand KM, and no one responded to the competitive request this time either, except the "Info5" agency.

Logically, because no other agency fulfills the condition stated in the tender documentation.

As a condition for participation in this procurement, it is stated that the bidder must submit proof of realization of one contract for the subject services in the last 12 months (until the publication of the procurement notice) whose value with VAT ranges from 30 thousand KM to the estimated value without VAT (35 thousand).

Notice of this procurement was published on the portal on August 4, 2020.

Therefore, "Info5" fulfils this rigid condition from the tender documentation, because on September 26, 2019, together with the agency "Grape", they got the already mentioned job of presenting the economic potential of RS.

They do not fulfil that second condition, because they were not able to get such lucrative jobs from institutions. Not all agencies have the "luck" that they have in Jerinić's ownership, that the conditions in the tenders were written in accordance with their possibilities.