Public procurement of the Bijeljina hospital: When the tender is "well-tuned" - the winner is known in advance 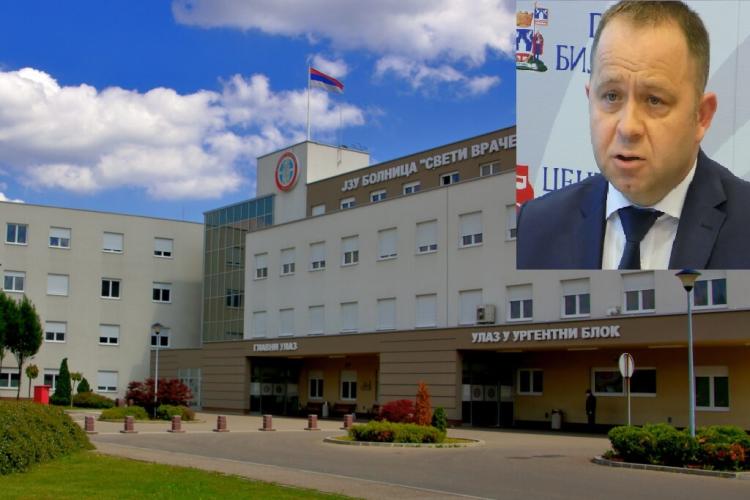 Bijeljina hospital "Sveti Vračevi" awarded another lucrative public procurement to "Medicom" from Bijeljina, the favoured and regular winner of the tenders of this health institution. This time, "Medicom" will collect over 1.5 million KM for the purchase of magnetic resonance imaging (MRI) devices, which will bring the amount collected from public procurement for the Bijeljina hospital in the past two years to over ten million KM.

The scheme by which this supplier regularly wins tenders is already old and well established. Tenders are designed in such a way that any possible competition to this bidder is eliminated at the start.

The manipulation of the "lowest bid price" and the estimated value of the procurement, as well as the criteria required from the bidders, provided "Medicom" with a safe profit this time as well.

The lowest price – the highest profit

The "lowest bid price" was used as a criterion for selecting the most favourable bidder in this public procurement process.

The estimated total value of the contract, as stated in the procurement notice, was 1,550,000 KM excluding VAT. 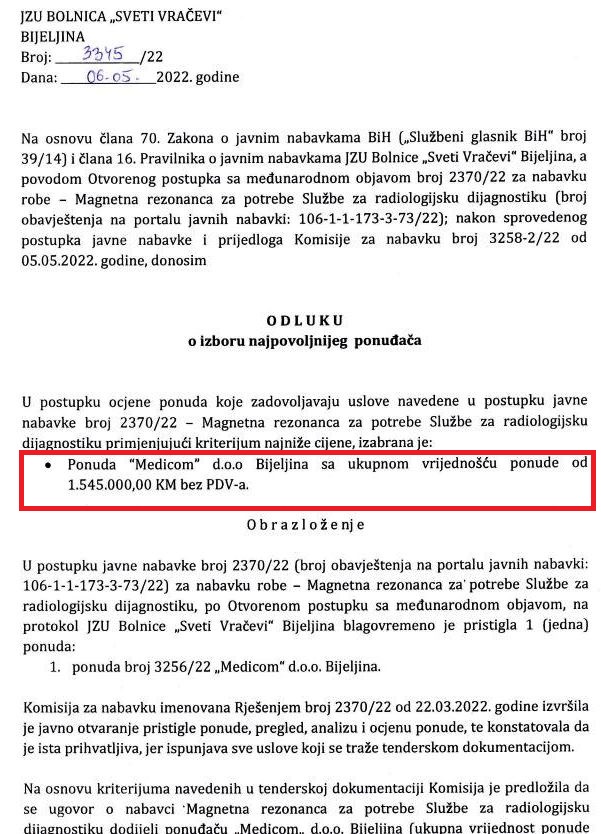 Compared to the procurement of the same (or similar) device carried out by other health institutions in Bosnia and Herzegovina, this is a fairly low cost of procurement. For the sake of comparison, the hospital in Mostar estimated the value at 2,360,000 KM for the procurement of devices with the same performance. 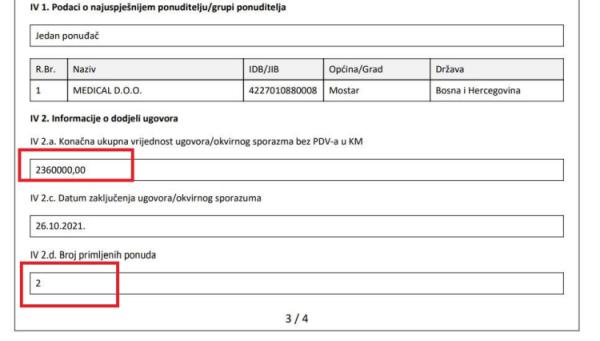 Determining such a low price automatically eliminated most of the potential bidders for the supply of MRI devices to the Bijeljina hospital.

Through other public procurements of the hospital in Bijeljina, they will quickly recover the "loss". More precisely, it has already been charged.

This is also indicated by the current business practice between this health institution and the obviously favoured supplier. 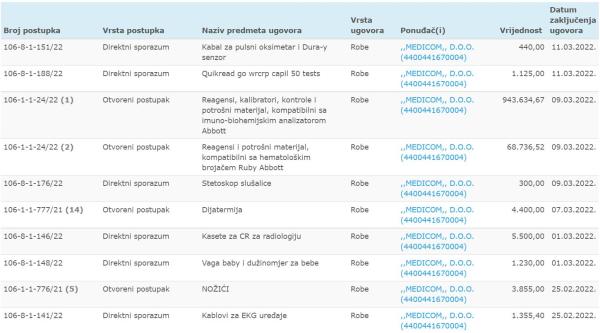 For example, from the initiation of the public procurement procedure for MRI devices to the conclusion of the contract, "Medicom" concluded as many as 35 contracts with the "Sveti Vračevi" hospital, the total value of which is approximately 1.2 million KM, excluding VAT.

The very procedure of this public procurement is full of "unusual" circumstances from the start.

The first notification about the acquisition of this device was published on December 24 last year. However, already on January 17 of this year, corrections were made to the notice so that the deadline for taking over the tender documentation was moved by four days, until January 21, 2022.

A new notice on public procurement was published on March 23 of this year.

Finally, on May 6, the director of the Public Health Institution "Sveti Vračevi", Zlatko Maksimović, signed the decision on the selection of "Medicom" as the "most favourable bidder".

Using the "lowest price" of the offer, as a criterion for choosing the most favourable bidder, as they say in Transparency International BiH, leaves a lot of room for manipulations in the public procurement system.

"This criterion gives great discretionary powers to the contracting authority, including the possibility to quote a price below the average value of the goods being procured. Thus, potential bidders lose their financial interest in participating in the bidding, which leaves room for the preferred bidder, who agrees to a lower price due to various possible interests. This interest can be an entry into the market, a basis for participating in other procurements of the contracting authority, and maintenance or procurement of consumables if the subject of the procurement is a device", says TI BiH.

It is also interesting that between the annulment of the decision and the selection of the most favourable bidder, "Medicom" received several more public procurement jobs from this health institution.

Among other things, this bidder was awarded the procurement of a pulse oximeter, the value of which without VAT is 14,998.90 KM (estimated value of 15,000).

Both of these jobs were awarded to the bidder through a competitive request process. In both cases, "Medicom" was the only bidder. However, "Medicom" received much more valuable business from the Bijeljina hospital.

From donors to profiteers

With the public procurement contract of Public Health Institution "Sveti Vračevi", which was concluded on March 9 of this year, "Medicom" was awarded the contract of procurement of reagents for the immuno-biochemical analyser "Abbott", in the value of 943,634.67 KM excluding VAT.

These are reagents, that is, consumables for the device that was just donated to this hospital by "Medicom". In 2016, the Center for Investigative Journalism (CIN) wrote about how Medicom's donations generate extra profit from the procurement of reagents and consumables.

Already that year, after donating a device whose value was estimated at around 250,000 KM, "Medicom" collected about 320,000 KM from the Bijeljina hospital for the purchase of reagents for this device.

The procurement of reagents has continued until today. Thus, in December last year, this bidder procured reagents for "Abott" in the value of 345,900 KM.

Reagents were purchased from the same supplier in previous years as well. Consumables were also purchased from Medicom for other devices that the hospital in Bijeljina received from this donor.

In May 2020, the "Impuls" portal also wrote (New players on the pharmaceutical market of Republika Srpska in the age of corona) about the favouritism of "Medicom" based on public procurement procedures in the health sector.

After all, numerous public procurements speak of the connections of these companies in the public health sector. There is almost no health institution in RS, whose tenders "Medicom" did not win. Most often as the only bidder. Because as they say, when the tender is "well prepared", the competition has nothing to look for. 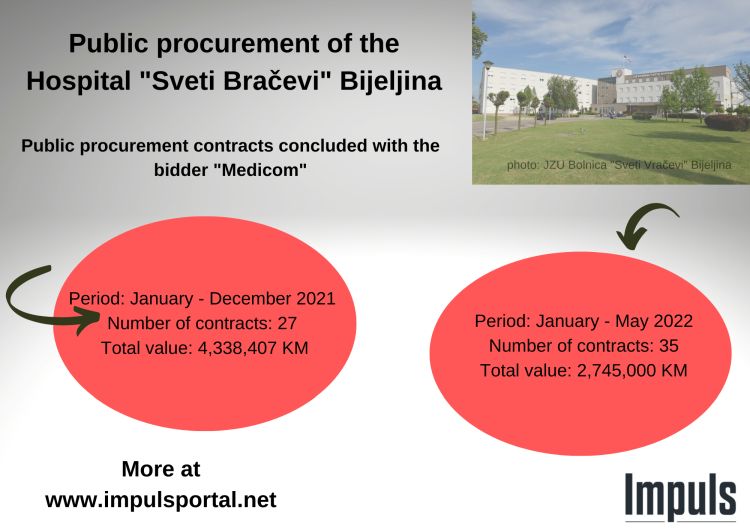