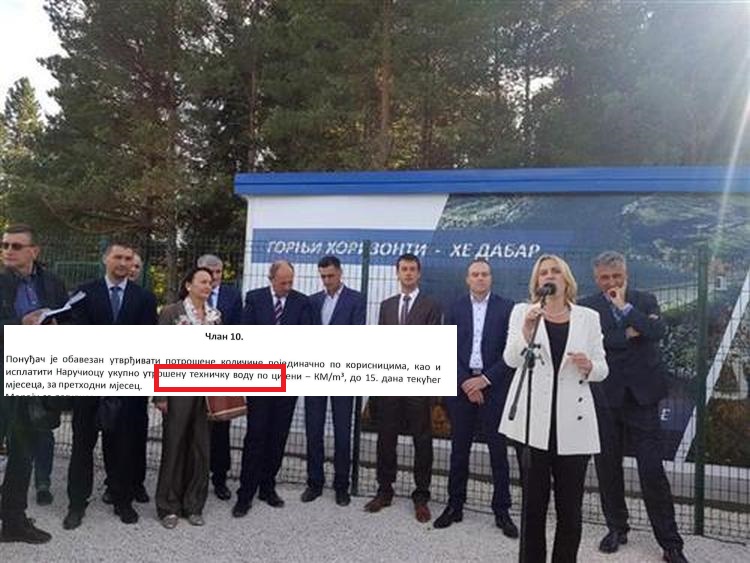 Although since its foundation in 2011, the Dabar hydroelectric power plant has not produced a single kilowatt of electricity, this does not prevent this company from squandering funds on public procurements of questionable justification, interpreting the Law on Public Procurement arbitrarily from case to case. Thus, for five years now, HPP Dabar has announced a tender for the selection of the most favourable bidder for the maintenance of the "Udbina" water supply system in the municipality of Nevesinje every year.

This job is regularly awarded to PC Nevesinje "Vodovod" every year and always for almost the same price of nearly 80 thousand KM.

It is interesting that a different procedure for selecting the most favourable bidder is carried out from year to year for the same subject of public procurement.

The selection of the most favourable bidder was sometimes done through a competitive request, and other times through an open procedure, to which of course only one bidder responded.

The Law on Public Procurement of BiH, however, clearly specifies which public procurement procedure should be applied, which is obviously not of much interest to the authorities at HPP Dabar. The public interest is only in the second plan.

On the basis of the work obtained, the public procurement of works, Nevesinje "Vodovod" regularly delivers water bills to users, residents of Nevesinje and surrounding villages. Representatives of the local government in this municipality like to brag about how they solved the long-standing problem of supplying the population with drinking water. However, in the contract between HPP Dabar and "Vodovod", it is stated that it is about "technical water", so the question arises, what kind of water do citizens pay their bills for!?

The decision on the selection of the most favorable bidder was signed by the Director of HPP Dabar, Slaviša Stajić, on April 29 of this year. The procedure for public procurement of the service "maintenance of the water supply system of Udbina and the construction pipeline" was launched on March 30.

The procedure for public procurement of services was carried out through an open procedure, and by the deadline for the submission of bids, only the bid of PC "Vodovod Nevesinje" was received. The Nevesinej water supply company submitted an offer worth 78,982 KM for this job. So, only eight KM less than the estimated value.

The "lowest bid price" was used as a criterion for choosing the most favourable bidder. Since there was no competition, the choice was not difficult. The contract with the bidder was signed on May 10 of this year.

However, exactly one year earlier, also on May 10, an almost identical contract was concluded with the same bidder. It is an identical procurement, and the only difference is in the public procurement procedure.

Last year, a contract on public procurement of works was concluded with the bidder, PC "Vodovod", for the same procurement subject. In the procurement notification, which was published on April 12, 2021, the identical estimated procurement value of 79,000 KM, of course without VAT, is stated. The selection of the most favourable bidder was made through a competitive application procedure. The offer of "Vodovod" was accepted, which was only two KM lower than the estimated value of the works.

An identical procedure was carried out in 2020. A competitive application procedure was also applied, and the estimated value of the works was the same 79,000 KM.

According to the Law on Public Procurement of BiH, the maximum amount of the estimated value of the procurement for which the selection of the most favourable bidder is made through a competitive request can amount to 80,000 KM. That was exactly the estimated value of the public procurement "Maintenance of the water supply system of Udbina and the accompanying construction pipeline", which was awarded to Nevesinje "Vodovod" in 2019 through a competitive application process.

Obviously, in the case of the public procurement in question here, everything has been done so that PC "Vodovod" AD Nevesinje has no competition.

Given that natural persons, as the ultimate consumers of water from the Udbina water system, have never signed a contract with either "Vodovod" or HPP Dabar, the question is on the basis of which water consumption is charged.

In the answer we received from the acting director of HPP Dabar, it is stated that the payment is made on the basis of public procurement, that is, the contract concluded between these two companies.

"The water supply network from the source of Udbina in the municipality of Nevesinje was not assigned to the management of JP Vodovod a.d. Nevesinje, but only with the mentioned company was a contract made on the maintenance of the water supply system of Udbina and the construction pipeline", the answer states. 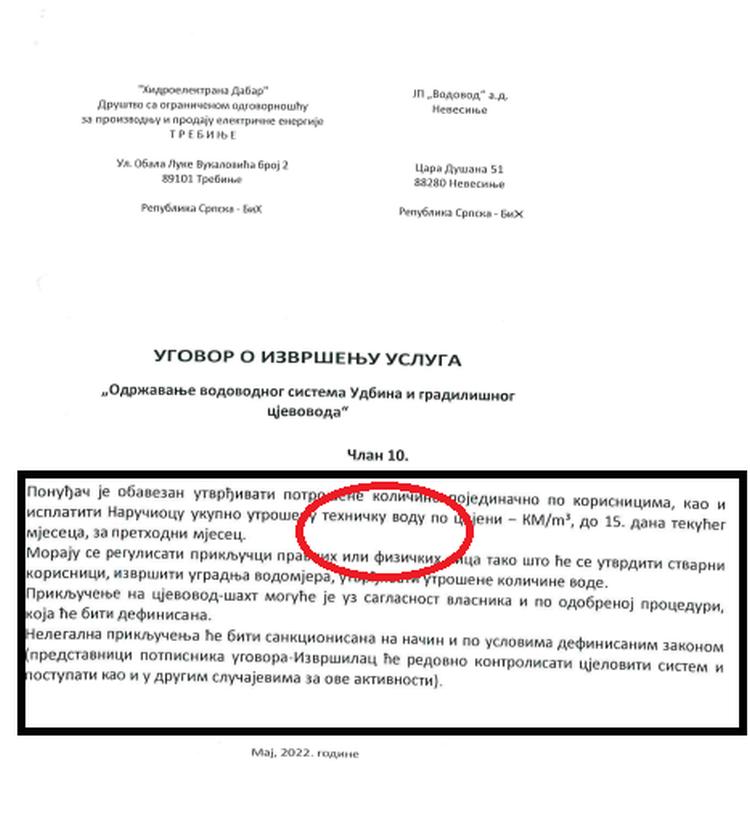 The founders of HPP Dabar are Hidroelektrane na Trebišnjici (HET) and the parent company Elektroprivreda Republika Srpska (ERS). The company was founded to manage the hydroelectric power plant as part of the "Upper Horizons" project, the implementation of which is ongoing. The deadline for the completion of the works, which was originally announced at the beginning of 2018, has been postponed several times. Access roads have been built so far, and work is underway on a 12-kilometre-long tunnel through which the water from Nevesinjsko polje should be directed to the future hydroelectric power plant. However, in addition to the deadlines, there was also a change in the estimated value of the works. From the original 320 million, the price increased by over 600 million KM by last year. The Chinese company with which the contract for the construction of the hydroelectric power plant itself was concluded at the end of last year, has not yet started work, although it was pompously announced at the end of last year. The Government of RS has been silent about this project for months.

As part of the project, a water supply system was built from the source of Udbina for the needs of the construction site, but also to supply the population with "drinking water". 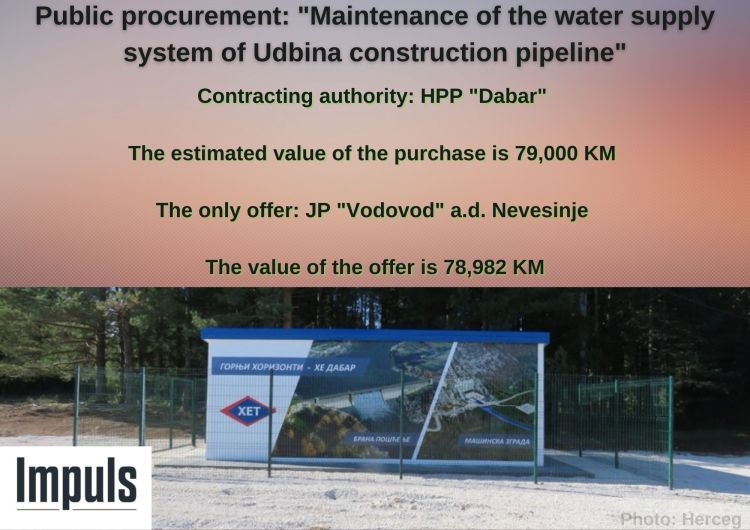 Conflict of interest: Through public procurement to the parliamentary bench, through loopholes in the law

Vlasenica square and monument, another million to "Zvornikputevi" with a dubious tender

Public procurement of the Bijeljina hospital: When the tender is "well-tuned" - the winner is known in advance

Ilidža: From the fight against construction chaos to the legalization of crime by the previous government